This first sub-section will discuss network firewalls outside of Security Onion.

When configuring network firewalls for Internet-connected deployments (non-Airgap), you’ll want to ensure that the deployment can connect outbound to the following:

In the case of a distributed deployment, you can configure your nodes to pull everything from the manager so that only the manager requires Internet access. Nodes will be configured to pull from repocache.securityonion.net but this URL does not actually exist on the Internet, it is just a special address for the manager proxy.

When configuring network firewalls for distributed deployments, you’ll want to ensure that nodes can connect as shown below.

All nodes to manager:

The remainder of this section will cover the host firewall built into Security Onion.

Port groups are a way of grouping together ports similar to a firewall port/service alias. For example, if you had a web server you could include 80 and 443 tcp into an alias or in this case a port group.

Host groups are similar to port groups but for storing lists of hosts that will be allowed to connect to the associated port groups.

The firewall state is designed with the idea of creating port groups and host groups, each with their own alias or name, and associating the two in order to create an allow rule. A node that has a port group and host group association assigned to it will allow those hosts to connect to those ports on that node.

The default allow rules for each node are defined by its role (manager, searchnode, sensor, heavynode, etc) in the grid. Host groups and port groups can be created or modified from the manager node using either so-allow, so-firewall or manually editing the yaml files. When setup is run on a new node, it will SSH to the manager using the soremote account and add itself to the appropriate host groups. All node types are added to the minion host group to allow Salt communication. If you were to add a search node, you would see its IP appear in both the minion and the search_node host groups.

There are two directories that contain the yaml files for the firewall configuration.

This directory contains the default firewall rules. The files in this directory should not be modified as they could possibly be overwritten during a soup update in the event we update those files.

/opt/so/saltstack/default/salt/firewall/portgroups.yaml is where the default port groups are defined. 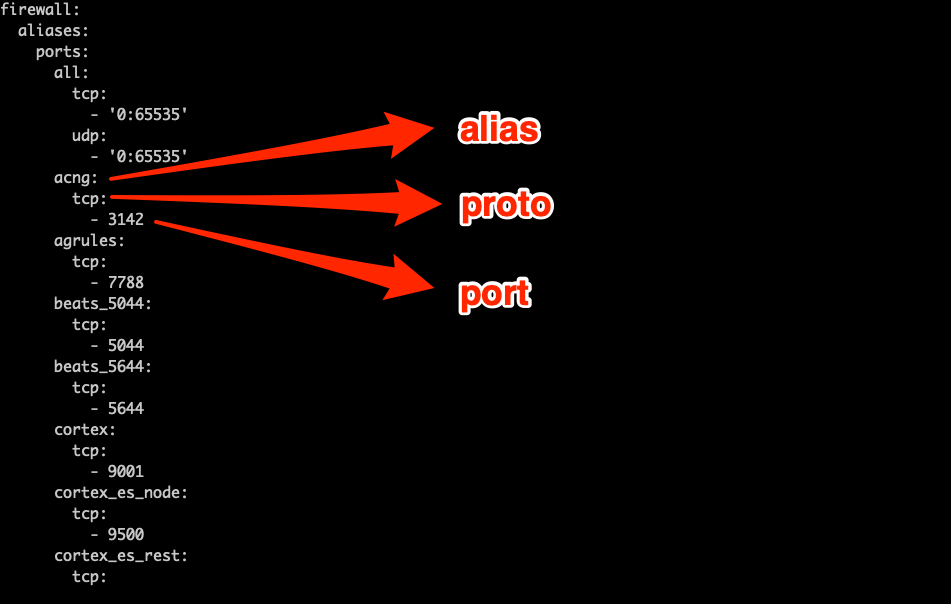 /opt/so/saltstack/default/salt/firewall/hostgroups.yaml is where the default hostgroups are defined. There isn’t much in here other than anywhere, dockernet, localhost and self.

/opt/so/saltstack/default/salt/firewall/assigned_hostgroups.map.yaml is where the default allow rules come together and pair hostgroups and portgroups and assign that pairing to a node based on its role in the grid. In the image below, we can see how we define some rules for an eval node. 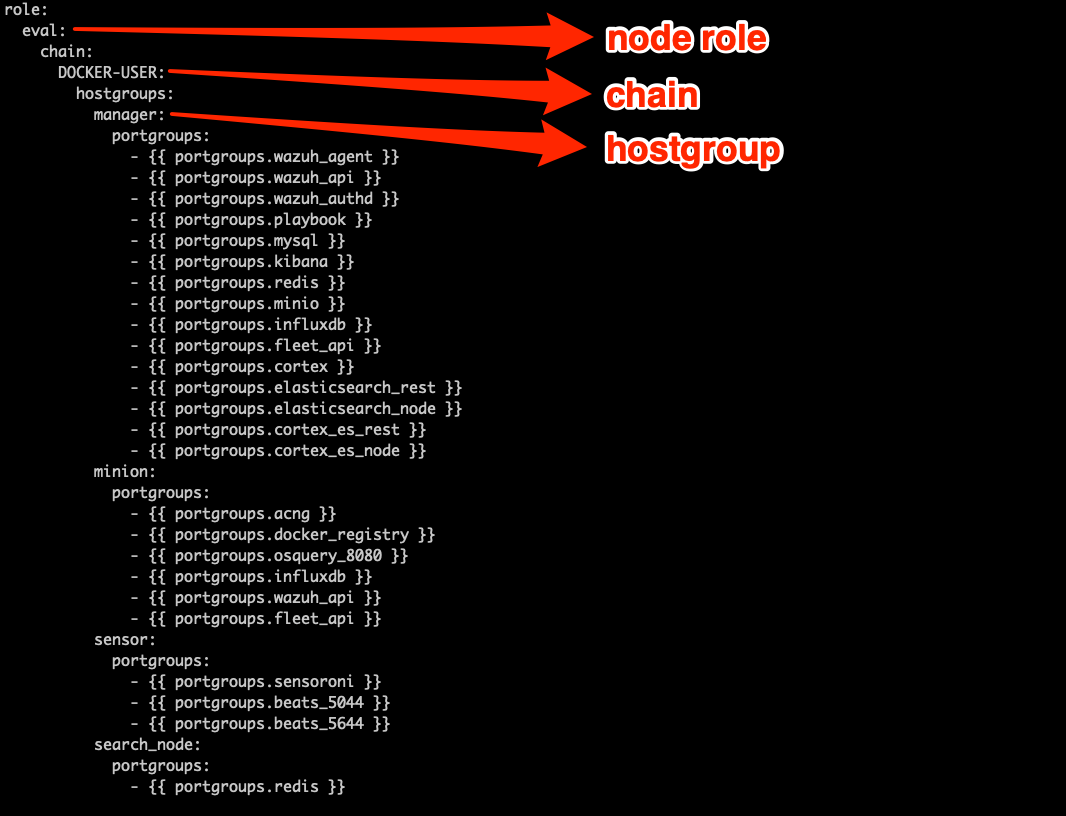 This directory stores the firewall rules specific to your grid.

/opt/so/saltstack/local/salt/firewall/hostgroups.local.yaml is where many default named hostgroups get populated with IPs that are specific to your environment. When you run so-allow or so-firewall, it modifies this file to include the IP provided in the proper hostgroup. Some node types get their IP assigned to multiple host groups.

Managing firewall rules for all devices should be done from the manager node using either so-allow, so-firewall or, for advanced cases, manually editing the yaml files.

Removing a host or network¶

If you previously added a host or network to your firewall configuration and now need to remove them, you can use so-firewall with the excludehost option. For example:

Allow hosts to send syslog to a sensor node¶

By default, if you use so-allow to add a host to the syslog hostgroup, that host will only be allowed to connect to the manager node. If we want to allow a host or group of hosts to send syslog to a sensor, then we can do the following:

All the following will need to be run from the manager.

Please review the Salt section to understand pillars and templates. Modifying these values outside of so-allow or so-firewall could lead to problems accessing your existing hosts. This is an advanced case and you most likely won’t never need to modify these files.