This section is a brief overview of connecting a Jupyter notebook/server instance to Elasticsearch to slice and dice the data as you wish. It will not cover the setup of a Jupyter instance, which has been thoroughly documented (using Docker) at https://jupyter-docker-stacks.readthedocs.io/en/latest/index.html.

As a best practice, we’ll want to create a dedicated Jupyter notebook user with just read-only access to the data inside of Elasticsearch. In Kibana, navigate to Stack Management -> Users and create the user with appropriate permissions: 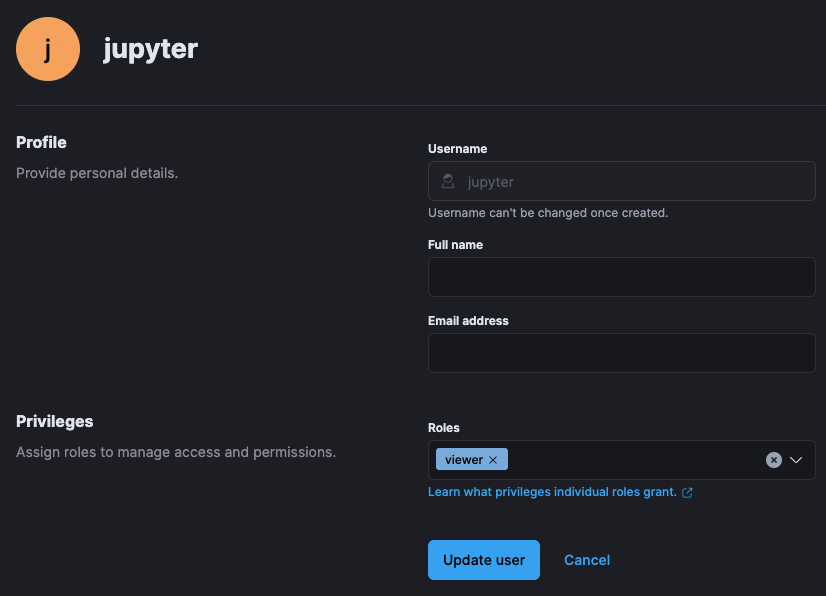 In order to allow network-based access to Elasticsearch, we’ll need to allow the traffic through the host-based firewall using so-allow:

We’ll choose the e option for the Elasticsearch REST API and provide our IP address(es) for which we could like to add an exception. Once complete, we should be able to reach the Elasticsearch instance. We can confirm connectivity using tools like curl, or Powershell’s Test-NetConnection.

The Jupyter environment will need to have at least the following Python libraries installed:

You can install these using the following commands on the Jupyter host, or within the Jupyter Docker container:

Once the Python prerequisites are installed, we can start executing commands within our notebook.

We’ll start with importing the libraries we just mentioned. In the first cell, we’ll paste the following:

Then, we’ll press Shift+ENTER to execute the command(s) within the cell (can also click to run the cell from the Run menu).

In the next cell, we’ll specify the Elasticsearch instance address and port (192.168.6.100:9200) and the username (jupyter) and password (password) we created within Security Onion, as well as the index filter we would like to use for searching (*:so-*):

We are choosing to use verify_certs=False here to avoid complications with self-signed certificates during testing. Ideally, we would want to make sure we are performing verification wherever possible.

Again, we’ll execute the code within the cell, by pressing Shift+ENTER.

We may see a warning like the following due to the fact that we are not performing verification for certificates:

For convenience during our testing, we can disable the warning in future runs, by pasting the following the next cell and executing it with Shift+ENTER:

In this example, we are looking for logs that contain a field called event.module and a value of sysmon (Sysmon logs). Once more, we’ll press Shift+ENTER and continue on.

Finally, we’ll submit our query in the next cell using the following:

The above code simply takes the results and converts them to a Python dict:

We can select a few fields, and modify the column values if we like:

Then we end up with something a little bit more targeted (you may need to adjust pd.options.display.max_colwidth for it to display appropriately) :

Obviously, there is much more we can do with this data other than just running the above example code. Happy hunting!